The Sandleford Priory estate passed through a series of tenants, with the lease being acquired in 1730 by Edward Montagu, a grandson of the first Earl of Sandwich, who married Elizabeth Robinson of Yorkshire in 1742.  After Montagu's death in 1775, his wife, renowned for her intellectual salon and known as `The Queen of the Bluestockings', made considerable alterations, using James Wyatt (1747-1813) for the house, and Lancelot Brown (1716-83) for the park and garden, for which Brown provided plans in 1781. At this time the landscape still incorporated formal garden elements close to the house, and there were no pools along the eastern valley (estate map, 1781).

Brown's design seems to have covered the valley east of the house, down to the sinuous Brown's Pond (which he created or enlarged) and beyond, in order to enhance views from Wyatt's new rooms on the east front (Hinde 1986). Mrs Montagu (d1800), a close friend of the Duchess of Portland who gardened at Bulstrode Park (Bucks, qv), continued to follow Brown's plans after his death in 1783, employing one of Brown's former foremen, Samuel Lapidge, to carry out the remaining work. From 1835 the estate was leased by William Chatteris (d 1889), during whose occupation further work occurred in the gardens, including extensive rhododendron planting, and who bought the freehold of the estate from the Dean and Chapter of St George's Chapel in 1871. In 1947 the estate was sold in separate lots and remains (1998) in divided ownership, the house being used as a girls' day school. 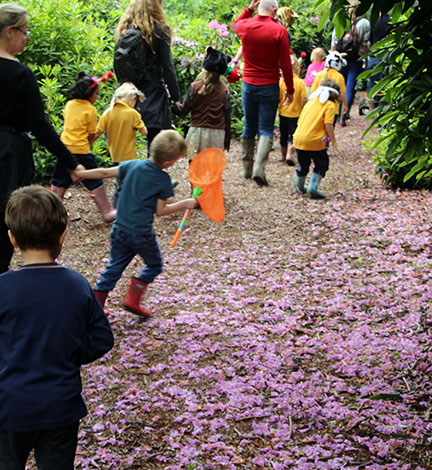 Sandleford Priory lies 2.5km south of the centre of Newbury and 1km north of the village of Newtown, on a hillside dividing the rivers Kennet, to the north, and Enborne, to the south. The 55ha site is bounded to the west by Newtown Road, this being part of the A34 connecting Oxford and Newbury with Winchester, to the south by the county boundary with Hampshire, marked by the River Enborne, and beyond this the village of Newtown, and to the north by a 1990s retail development. The east boundary lies adjacent to the agricultural and wooded land of Greenham Common. The site is situated on a south-facing hillside which generally slopes down from north to south. The setting is partly urban, with the southern extremity of Newbury close by to the north, and agricultural, with the former western parkland (Conveyance map, 1871) lying adjacent to the west of the A34. The latter area contains a former drive, now a track, which gave access from the A343 Andover road (OS 1882). The southern parkland is divided at its south end by the A339 road to Basingstoke which runs along the north side of the Newtown Pond. Long views from the house extend west, over the former parkland, and south, to the Hampshire/Berkshire Downs.

The main drive enters off the A34, 150m south-west of the house, curving north-east to the main entrance on the west front, passing tennis courts set into a lawn west of the house, and mature specimen trees, including several cedars, to the south, with extensive views west. This drive, constructed after the Second World War, replaced the former south drive which entered 400m south of the house, where the present Basingstoke roundabout now stands. The drive curved up the hillside between park trees to arrive at the west front, and seems to have been part of Brown¿s scheme (Wade 1997). Formerly a spur joined the south drive close to its southern end, giving access along the south side of the parkland from a lodge which stood c 1.3km east of the south entrance at the south-east corner of Peckmoor Copse, which adjoins Greenham Common. 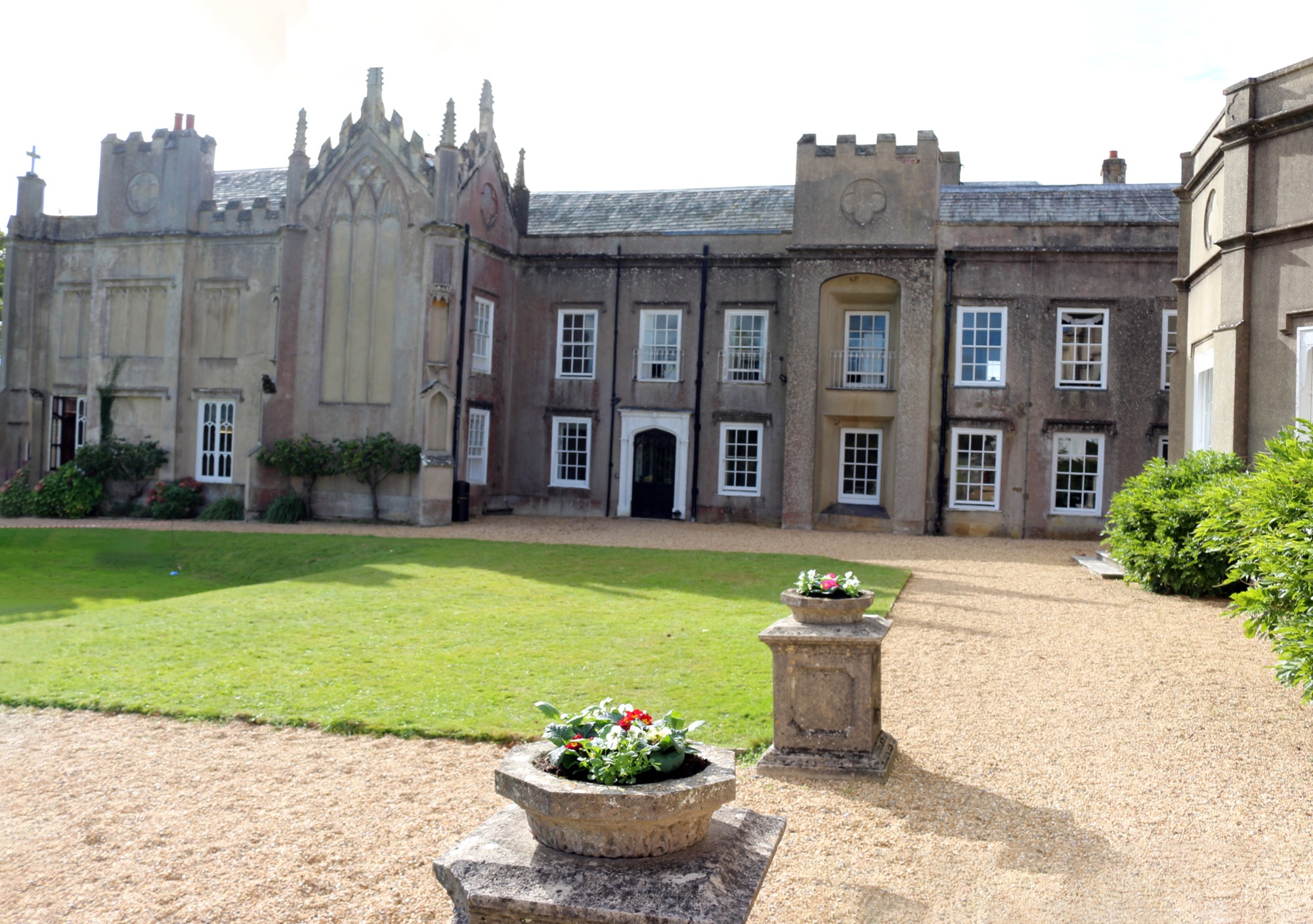 The former north drive entered the park 400m north of the house close to the junction of Deadman's Lane with the A34, past the lodge, a rendered cottage of one-and-a-half storeys. The drive, traces of which remain visible in the park, curved south across a plateau and then down through the park, with extensive views to the south and west, arriving at the west front. A spur off this drive, traces of which may remain, entered at the north-east corner of the park, 900m north-east of the house, past a small lodge, curving through the north park to join the north drive 300m from the house. From the north-east lodge a further drive, traces of which remain, curved south and west close to the upper ponds, entering the pleasure grounds 200m north-east of the house. It then ran west through the former Wilderness within the pleasure grounds (estate map, 1781), past the north side of the stables, to join the north drive 50m north of the house.

A further, west, drive (possibly on the course of an earlier track) appears to have entered the former west park 3km west of the house, set some way back off the A343 Newbury to Andover road, the entrance marked by Park Cottage, a two-storey rendered cottage standing adjacent to the drive. The drive, still extant as a track and public footpath, curves across a plateau through what is now open agricultural land bounded by woodlands, dropping from the north-east corner of Gorse Covert (formerly Waterleaze Copse, OS 1882) down the hillside towards the house, from which hillside the west front and South Park are prominent in views east. The drive terminates at the A34, 175m south-west of the house and opposite the late C20 drive entrance.

Sandleford Priory (C14, James Wyatt 1780-1, listed grade I) stands towards the centre of the site, near the top of the south-facing hillside, with extensive views south and west over the surrounding countryside. The two-storey rendered house, of T-plan, incorporates remains of the monastic buildings within a structure otherwise remodelled internally and externally by Wyatt in Gothic style for Elizabeth Montagu.
A series of late C20 school buildings have been erected to the north-east of the former chapel.

The two-storey rendered stables (James Wyatt 1780-1, listed grade II), now converted to offices and classrooms, stand 10m north of the Priory; also built in Gothick style, they surround a courtyard on all but the west side.

The gardens and pleasure grounds lie east of the house, extending down the hillside to the east to a chain of ponds running south down a small subsidiary valley. The south and east fronts are linked by an adjacent low, grass terrace with a gravel path, which extends east along the south side of the former drawing room (Robert Adam 1780s) and C14 former chapel. A central set of low stone steps on the south side of the chapel leads down to a lawn that extends south to the park and east towards Brown's Pond. The level area, enclosed to the north and west by the house, was formerly a bowling green (estate map, 1781). 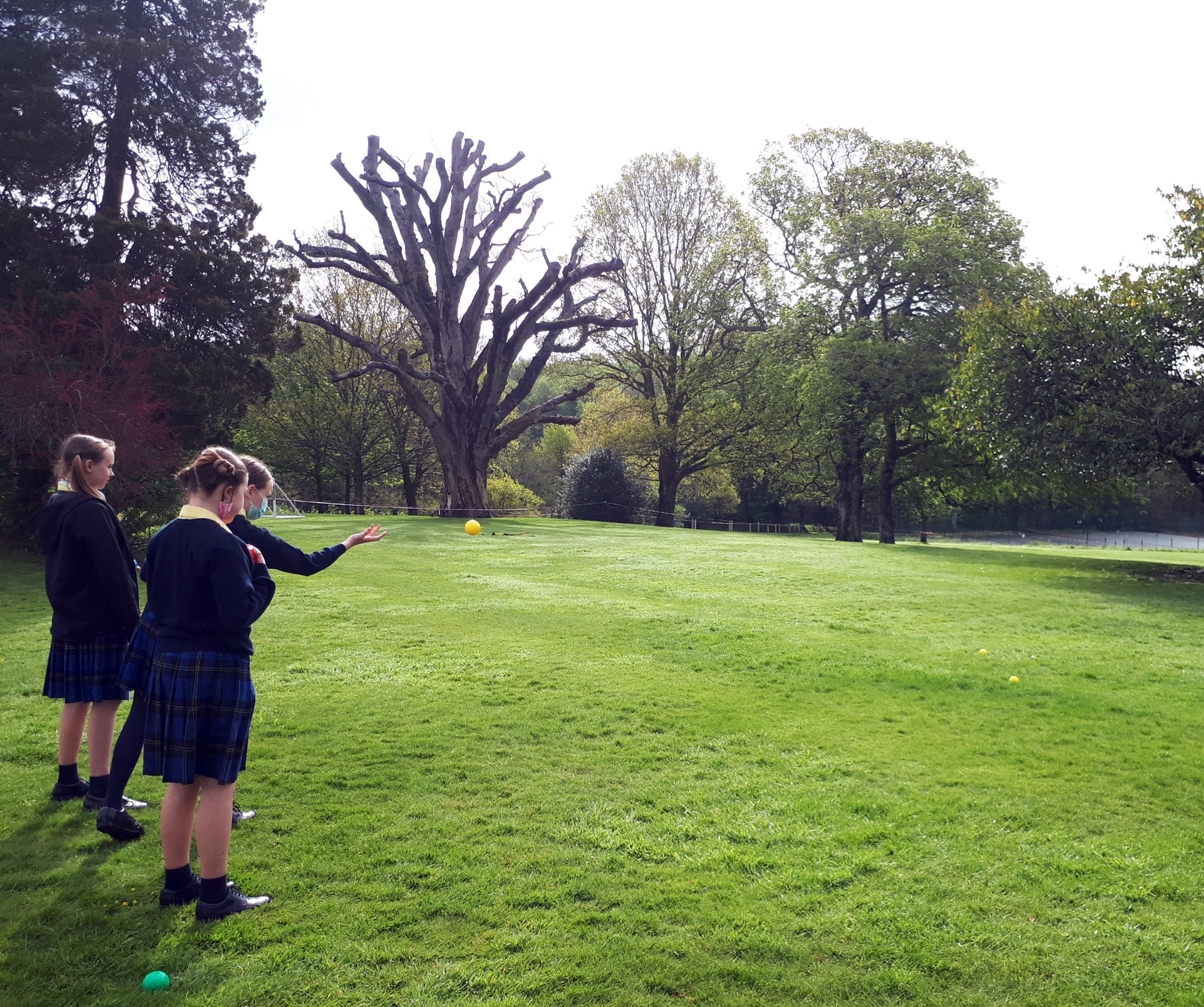 East of the stables a path leads down the hillside into the pleasure grounds, through a linking area of woodland ornamented with mature yews and rhododendrons which leads to the stream where it enters the north end of Brown's Pond. By 1781, just before Brown's improvements began to be implemented, this area was known as the Wilderness Walk, from which a serpentine walk led east down to the undammed stream (ibid).

A small footbridge carries the path across the stream at the north end of Brown's Pond, overlooking the length of the Pond, the path continuing east up the hillside beyond. A path from here (now overgrown) gives access northwards to the two ponds above Brown's Pond, set within ornamental woodland (OS 1882).

A path extends south along the east side of Brown's Pond, back to the east by woodland covering the rising hillside beyond. The path turns west at the south end of the lake to run across the substantial earth dam above marshy woodland to the south, through which further paths run. Having crossed the dam, the path emerges at the east side of the lawn running down the hillside from the east front.

The park can be divided into north and south halves, both laid largely to pasture with scattered mature trees, including cedars and Wellingtonias. The northern half contains a caravan park, lying north-west of the upper ponds, together with gravel workings towards the north-east corner. The area along the former northern boundary has been eroded by the insertion of houses and a refuse collection point. Sandleford Farm, the late C18/early C19 former Home Farm, stands adjacent to the west boundary at the south-west corner.

The southern half of the park is divided by a belt of loose woodland enclosing the stream running south from Brown's Pond, which feeds Woodhouse Pond at the southern end. This pond is divided by the A339 from the partially silted-up Newtown Pond running along the south boundary and enclosed by trees; the latter is thus cut off from the majority of the park.

Views extend west and south from the southern part of the north park and the northern end of the south park across the former west park, lying west of the A34 and now largely under arable cultivation.

The former kitchen garden lies 200m north-west of the house, on the west side of the A34, opposite Sandleford Farm. Surrounded by a brick wall, it is divided into two by an internal wall running west to east across the centre.